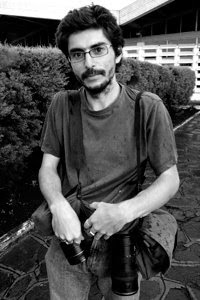 Photojournalist and press photographer Walter Astrada won "1st Prize Stories" in the Spot News category of the 2009 World Press Photo contest. I read about him in a recent issue of PDN magazine. Astrada's image of a 7-year old Kenyan boy screaming as a policeman approached his home (shown below) struck me hard. This image haunted my memory for days as I thought about the fear and terror in this little boy's heart.

Walter Astrada recently took time out from his travels through Uganda to grant Dodge & Burn this interview.

D&B: Where are you from?
W&A: I was born in Buenos Aires, Argentina, but since 1999 I'm traveling and living outside my country.

D&B: What kind of photography do you shoot and how did you get started - any "formal" training?
WA: I shoot for wire services but also I shoot long term projects. For example now I'm working on one about "violence against women" in different kinds of violence in different countries and continents.

I started it in Guatemala documenting the killing of women (what is called "Feminicide") in 2006 and 2007, last year and this I was documenting the sexual violence in Congo. Later this year I will be documenting violence against women in India.

I hope to be working in one European country next year. 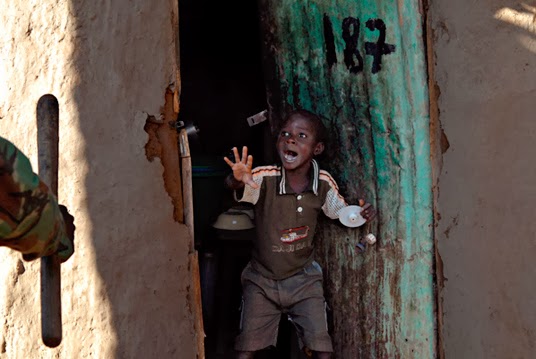 Copyright Walter Astrada, Argentina, Agence France-Presse.
Monday Lawiland (7) screams as a policeman approaches his home, in the opposition stronghold of Kibera, in Nairobi, on January 17th.

D&B: What cameras or techniques do you use?
WA: Since 2003 I use only digital. Actually I'm using Nikon D700 and passing to fixed lens again.

D&B: Who are your mentors (in photography)?
WA: Really, I don't have one mentor.

D&B: When did you realize you could have a career in photography? Describe your journey towards becoming a working photographer.

WA: I don't know really, but at 13 years old I decided that I wanted to be a photojournalist after seen an exhibition of Argentinean press photographers.

When I finished high school, I made a workshop on photojournalism and the next year I made another. When I finished the second one, to the best students the prize was an internship in the main newspaper, La Nacion.

When I finished the internship it was not possible to stay on as photographer. I decided to continue working on my own to prepare a portfolio and leave Argentina. When I was ready to leave I called the photo editor of La Nacion to show my portfolio. After he finished looking at it, he asked me if I was working for anybody. My answer was no because I made the portfolio working on my own.

He offered me a 3-day test to be photographer. After the 3 days I was working as a photographer there.

But what I wanted was to be traveling and shooting my own projects - 2 years later I resigned and I started to traveling in South America.

What do you hope to achieve with your photography?

WA: I know that it's not possible to change the world with one photograph, but I hope if after some people see my work and they start to think that what they see is not right, then I think I achieved my purpose. For that principally I work on topics where human rights are not respected.

D&B: What's your dream photography project?
WA: Actually, I'm working on something which I consider to be a very important project - it is about violence against women.

I think it is a problem that not many people are giving enough importance to, but we can't talk about 100% of human rights being respected when 50% of the population of any country is under threat of been punched, hit, tortured, raped, battered, killed...